.
You are here: Home / Blog / Today I Shall Be A Brilliant Gardener…

Two things. A sunny weekend, and the promise of Chelsea Flower Show on the box every night for a week or so.
That signals a slight panic and a flying visit to the garden centre.
In my head I know just what to get. A few pretty flowers and something to grow in the veg patch. Check. It will be a military operation – In and Out in ten mins flat. And back to the homestead triumphant with a boot full of stuff, which will be properly planted and cared for, resulting in a garden just like the ones on the telly. After all if they can create those fab gardens in a week, so can I! Of course I can ..
Hmmm
Why are garden centres full of people who look like they know exactly what they are after? And they know exactly what they are looking at too.
‘Lovely Alstroemerias, dear’ say whaaaat?
Peering over their varifocals, with a sensible husband in tow pulling the trolley. Maybe that’s where I went wrong. I should have drafted in back up, in the form of MrH. These women know exactly what they are doing. Watch & learn, Sal, watch & learn.
Anyway, half way round and trying to balance 4 pots of ‘pretty flowers’ in my Mulberry handbag,  I decided it was probably best to retrace my steps ALL THE WAY BACK TO THE START, and get a trolley. Retracing your steps in a garden centre is, to me, akin to retracing your steps in IKEA. But at least in IKEA, if you do that there’s the restaurant. And a loo.
I digress.
Focus woman focus!! Suddenly can’t even remember what the garden even looks like and drift off down the clay pot aisle, lovely pots..
Back on track and I’ve decided our herbs, currently languishing in an old tin bath, are probably a bit dead and could do with replacing with useful herbs. Mainly ones that I can use in my fav chicken recipe which I’ll share on another ramble, with you!
Veggies, check. I am an advocate of, what I call, Half a Chance Gardening. So, throwing caution to the wind, I bought runner beans, perpetual spinach and a load of other packets (including sunflowers, not strictly veg… But who’s checking) and figure they’ve all got half a chance …
Ok, pretty flowers – OMG I need them ALL. Immediately!
I  eventually settled on Busy Lizzies & bush lobelia (not the trailing type, even though I love the trailing type) for our small borders under the standard roses out the front.
And may have accidentally bought more compost than I know what to do with. She stumped me at the till, with all the different offers and I panicked!
Plus now I’ve been here at least an hour and a cuppa is well overdue – this gardening lark is exhausting…
Ooh! Pretty pink gardening gloves. And just look at those lovely doormats! Stop now. Leave!
Luckily the bloke who carries the compost to your car, was available, poor chap. I sort of made apologetic noises and busied myself with loading the car up with everything in my trolley while he lugged the compost over. See? Why did I feel bad? It’s so typically English to feel bad about that isn’t it? (Omg is it only me?) It’s his job but still I felt the need to apologise and look busy! (I’m having a pedicure tomorrow and I already know I’ll apologise to the beauty therapist. And don’t even get me started on apologising to the doctor before a smear test! Whyyyyy???!)
Right, back home with the bounty and actually, had a lovely afternoon planting everything, apart from a tricky moment involving a spaniel and a tray of chives.
Even got the bean sticks up, like my Mum does it, in a long, wigwam formation. Then got bored and made a nice round wigwam too. 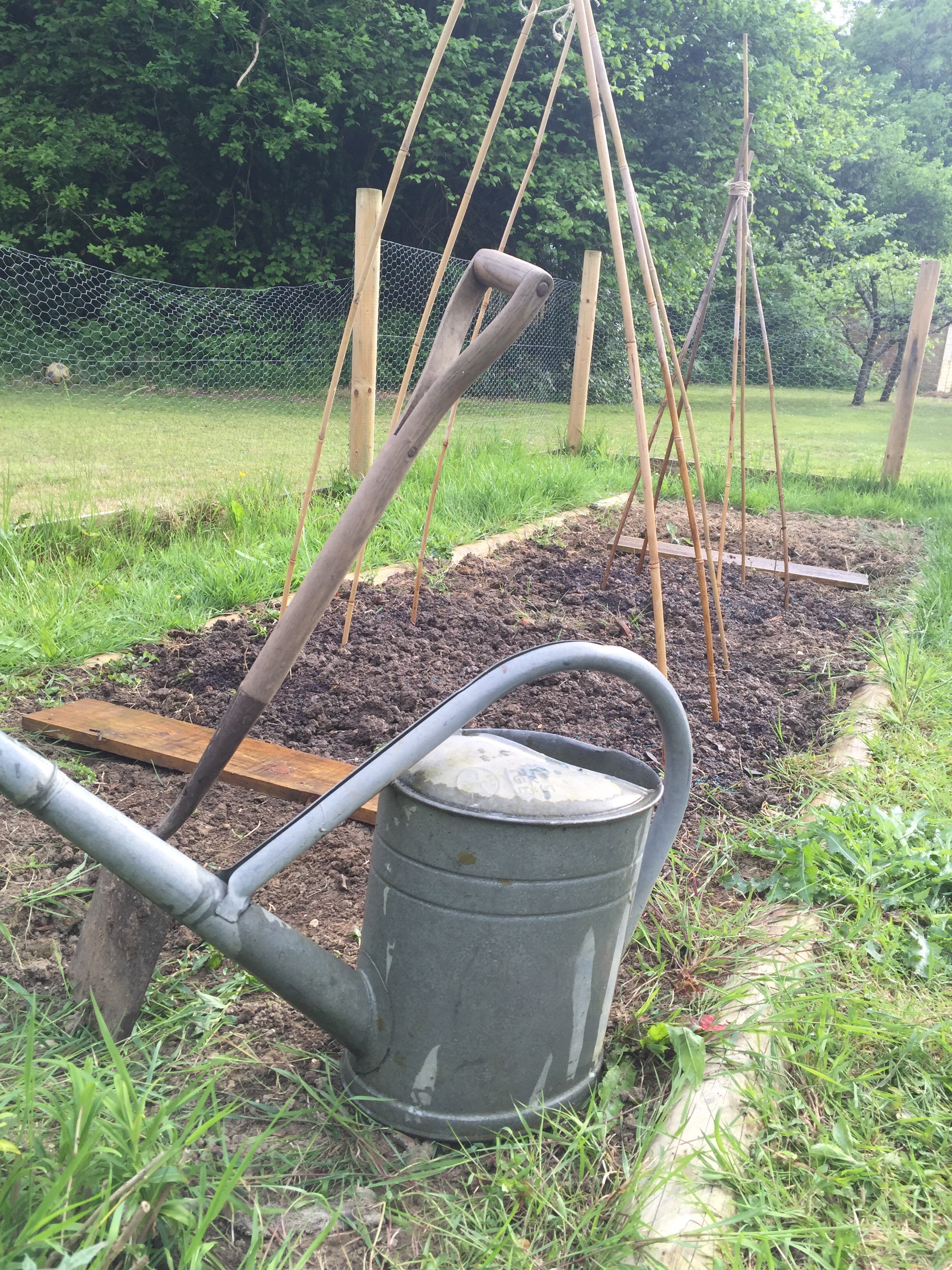 I know you’re supposed to plant runner beans on the windowsill first, but I confess to just poking the seeds in the ground – surely there won’t be another frost? Half a chance. Totally overlooking the (now obvious) fact that they might just get eaten by slugs or mice – drat.
Anyway, on the upside, I used ALL that compost ! Hurrah! Compost is like magic, disappearing stuff, isn’t it? In fact, I might just pop back this weekend, for some more. But not if its the same compost bloke.  Obvs will check the situation, first. If it’s still him, will just get pink gardening gloves and a doormat….? 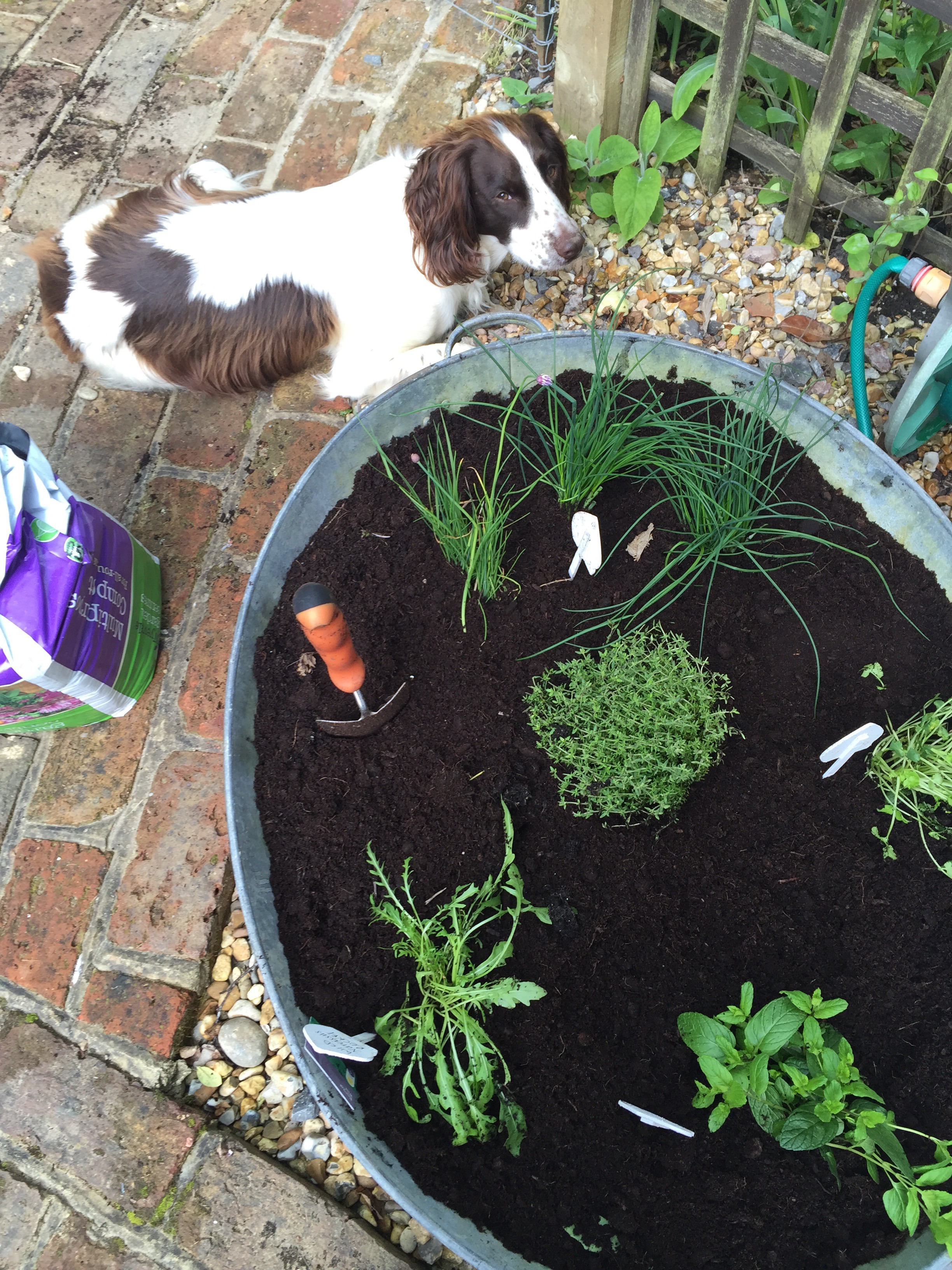