.
You are here: Home / Blog / Insta Glam vs Instasham – And is it so different to bygone generations?

Insta glam vs insta sham – Self preservation or a lie? How different IS it?

I went to post a pic today – a carousel of our bedroom – just by ducking to the side of the room, I was able to crop out all the rubbish – the clothes spilling out of the wardrobe (the doors that never close) the suitcase under the bed, the linen basket, the ironing hanging up ready to be put away – etc

The pic looked lovely. Just adjust the shadows and light a bit – perfect. 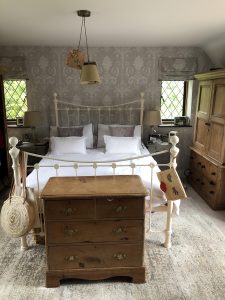 It is a slightly tweaked truth.

I wanted to post both pictures so the second image wasn’t tweaked at all. and I stood in the worst place to get the worst angle. 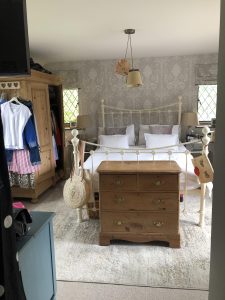 Both a truth. Both our room. Sharing both.

It got me thinking.

It reminded me of when someone says ‘Hi, how are you?’ and you have the option there and then, to say brightly ‘All good thanks! you?’

You get to choose which words to speak. And it largely depends who’s asking as to what you say, doesn’t it.

You might be thinking ‘Actually awful, blah happened and I feel terrible and haven’t stopped crying and I can’t sleep’

Sometimes it’s actually easier and less draining to say that. To speak your truth may just open up too much conversation and drain the last bit of energy from you.

I love pretty squares, but I think we all realise they are just that and the squares never show the whole truth.

I don’t think times have altered THAT much over the years, either. Social media does get a bit of flack. And I can see why, everything and everyone is so accessible. Anyone can portray any life style they want. Anyone with a phone can take and edit a nice picture and anyone can fashion themselves an online life that looks perfect. (Although I think that, in itself, must be exhausting)

But all of this got me thinking – maybe to simpler times of my Grans’ era.

My two Grandmothers couldn’t have been more different. My Nan-nan (Mum’s Mum) was brill. She was my friend, she loved everything I love, and if she was here today you bet she’d have had an Instagram account !! It was her that gave me my love of shoes, she LOVED shoes and she let me play for hours with her shoes and her jewellery – she had so much costume jewellery she  stored it in a big box under her bed. I’d ask her to pretend she didn’t know me so I got to see her reaction as I casually teetered past the bathroom, decked out in her best kitten heeled  slingbacks and a string of plastic pearls from  Woollies -I’d make her sit on the side of the bath and say  ‘Oh I love your shoes!’ as I walked past – haha!!

My Grandma – well, she was a different kettle of fish entirely. She was almost victorian in her ways. she rebuked modernity. She had a pantry with a marble slab that she insisted would keep the butter (chicken, milk, cheese, basically anything that should have been in an actual fridge) cool enough.

She had a flat iron that was perfectly good enough to iron with –  ‘Who needs electric irons??’ she’d protest.

She had a front door step that would have been the envy of the road. She lived in a Victorian detached house with a bay window, stone mullions and a bright red front door with a shiny brass knocker.

It looked PERFECT from the outside. Her grass was neat, the flowers always bloomed and the holly hedge was clipped to an inch of its life.

A perfect front. And I wonder if the neighbours judged her on the picture perfect appearance?

She chose not to share her truth, and for the next 60 years after ‘it’ happened, she kept up appearances and kept that frontage perfect and despatched Grandad to clip the holly hedge and it all looked just so. People were probably jealous of what they saw. Jealous of what  they may have perceived to be, perfection. The neatest house on the road.

The truth was, that everything was far from ok. When my Dad was 16, his younger and only brother died suddenly and tragically in an accident at home. Richard was 11. No one ever got over it. My Grandma would be on ‘tablets’ for the rest of her life and no one would ever speak of  what happened. (What happened was, he had found a lump of metal in an old and abandoned derelict house, and he took it home and when no one was in, he decided to take it  to the shed and try to spilt it open with a hammer. It was an unexploded hand grenade left over from the war (this was 10 years after the war ended) He was killed outright and so was his best friend. Utterly devastating, I can’t even imagine)

I don’t think any of them could bear to move house after that. And to keep things exactly as they had been might have been the only way my Grandma could function. Which would explain the reason why she didn’t want to move with the times and get a fridge, or an electric iron.

To keep the house as neat as a new pin and to keep the front as perfect as it had ever been, was probably less exhausting than facing the truth. The truth that EVERYTHING was wrong and that EVERYTHING had changed. It was her way of controlling what she could control and by doing that, she avoided any questions and conversations, with the ebb and flow of neighbours over the years, that she would never be ready to have.

She was never one to ‘air her dirty washing’ and ‘sweeping a problem under the carpet’ was the proper way to deal with things. ( I know I know. Hard to imagine now isn’t it)

So you see, in a weird way, my comparison, although extreme, to today, that what we portray, might not be a manipulation of the truth to gain admiration and respect or to make anyone jealous. It might actually be a form of self preservation. An escape from what might be happening. A pleasant distraction – a beautiful rabbit hole.

I think that we are all learning that the perfect lives seen on IG are NEVER perfect. And I believe that perfection might sometimes be a form of control and possibly escape. (I also think it’s ok to show the perfect for no other reason, than it makes you happy)

We all know that if social media is making you feel less than good about yourself, you should stop looking, but I do think that’s easier said than done!

My Grandma’s would have been utter perfection. The geraniums in the greenhouse would have been worthy of a rosette. The lawn would have stripes and best china would have always been in shot (she had a whole CUPBOARD full of ‘Old Country Roses by Royal Albert’ which she never used as it was the good china. I could never understand it and I think it’s where I get my ‘maverick’ ways from – USE THE GOOD CHINA, WEAR THE GOOD SHOES, USE THE GOOD HANDBAG, WEAR YOUR BEST DRESS!!!)

My Nan (Mum’s Mum) used to let me help her polish her front step (Instagram is the new front step haha) We used a polish called Cardinal Red. She let me slop it everywhere. and then we’d sweep up the leaves and rose petals from the path, and admire it all. She liked it nice but it was never perfect. I liked it better at her house than Grandma’s. It was warm and cosy and like home should be. We were all a bit scared to move, in Grandma’s house.

But now, as I am sitting here thinking, I can understand my Grandma’s need for control and perfection. It was her way of coping.

I wonder how many IG accounts are hiding a bigger truth behind the beautiful imagery and is it so different to times gone by?

I also wonder if I need a chocolate biscuit as this is quite deep for a Thursday afternoon!

If you are feeling wobbly, don’t think that no one else wobbles. Just that some, like my Grandma, don’t show it. For no other reason than self preservation and escape.

What do you think? Too deep?

Yeah, time for a chocolate biscuit!

Thanks for stopping by!