For my very first Guest Post, I am delighted to introduce Peter. Peter has myeloma and he will need a stem cell transplant. He is working tirelessly to find one. And by doing this, he is also finding genetic matches for others.  I am delighted to be able to help him
Here is Peter’s story in his own words.
7 Years…
Would you have asked your doctor the question?
Should I have asked him?
Well, as you get to know me, you’ll understand that I simply had to ask. Even though I knew in my heart of hearts I would not want to know the answer.
7 years.
I’m pretty sure you can guess what the question was now.
So how did I get to a point in my life where finding out how long I might have left was an acceptable request to make of a medical professional?
I’ll take you back to September 2016. This is me at what I would call the peak of my fitness…ever. 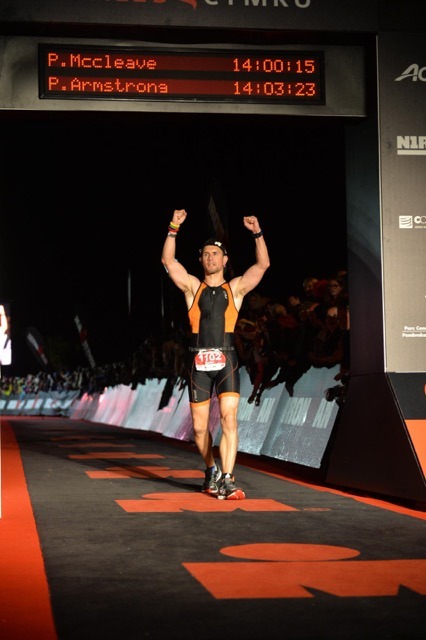 I’ve always been active. Biked from London to Paris, ran a few half marathons and Tough Mudders.
I like a challenge.
I guess these allowed me to deviate marginally, from what many would assume to be a pretty standard path through life.
Despite numerous questionable decisions along the way to making it to the ripe old age of 39, I had managed to convince Jenny that I was husband material, have 2 boys (then aged 7 and 4) and even convinced a bank to extend me a mortgage. 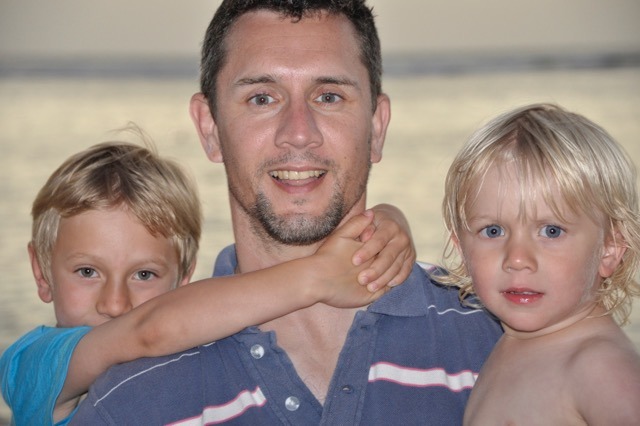 As I said, standard. So after 9 months of solid training, I started and finished Ironman Wales.
The biggest challenge I had ever set myself and I’d done it. Pleased as punch to say the least and my incredibly supportive family could not have been prouder (or happier to see the back of the 6 days a week training regime!)
2 days later, I found myself hooked up to a steady supply of intravenous drugs whose purpose was to clear my system of Legionnaires, Pneumonia and Sepsis.
A heady concoction of unpleasantness, which is pretty serious in its own right. But I survived this blip and tried to carry on with life as normal.
It’s at this point I’ll tell you that I am not a fan of going to the doctors. I never went and like so many men, just persevered with ailments; they would clear of their own accord.
Unfortunately this wouldn’t. I won’t bore you with the ins and outs of the subsequent 6 months but they culminated in another visit to the doctor, which proved to be the most significant and earth shattering of my life.
“We suspect you of having myeloma”
“Ok, can it be cleared with antibiotics?”
Pause…
“Unfortunately it is more serious than that. It is a blood cancer”
I actually laughed.
“Can it be cured?”
“No”
A fog descended on my mind and the rest of the conversation was a blur as I made every excuse to leave the room asap.
The next 48 hours were hell.
Telling Jenn. My parents. Keeping it all under control in front of my boys.
Nights were the worst when the lights went out; I only had myself to engage with.
Anger, sadness, frustration, injustice.
Why me? What had I done to inflict this upon myself and my family?
The list of emotions and questions went on and on.
And waking up each morning became a mental battle. Usually, you can snap out of a nightmare and it’s all ok. Now, I was going to sleep to escape reality and waking up to face a horror I could do nothing to remedy. No working or training my way out of this one!
Roll on 14 months and I have had 3 different types of chemotherapy of varying degrees of success and an autologous stem cell transplant. 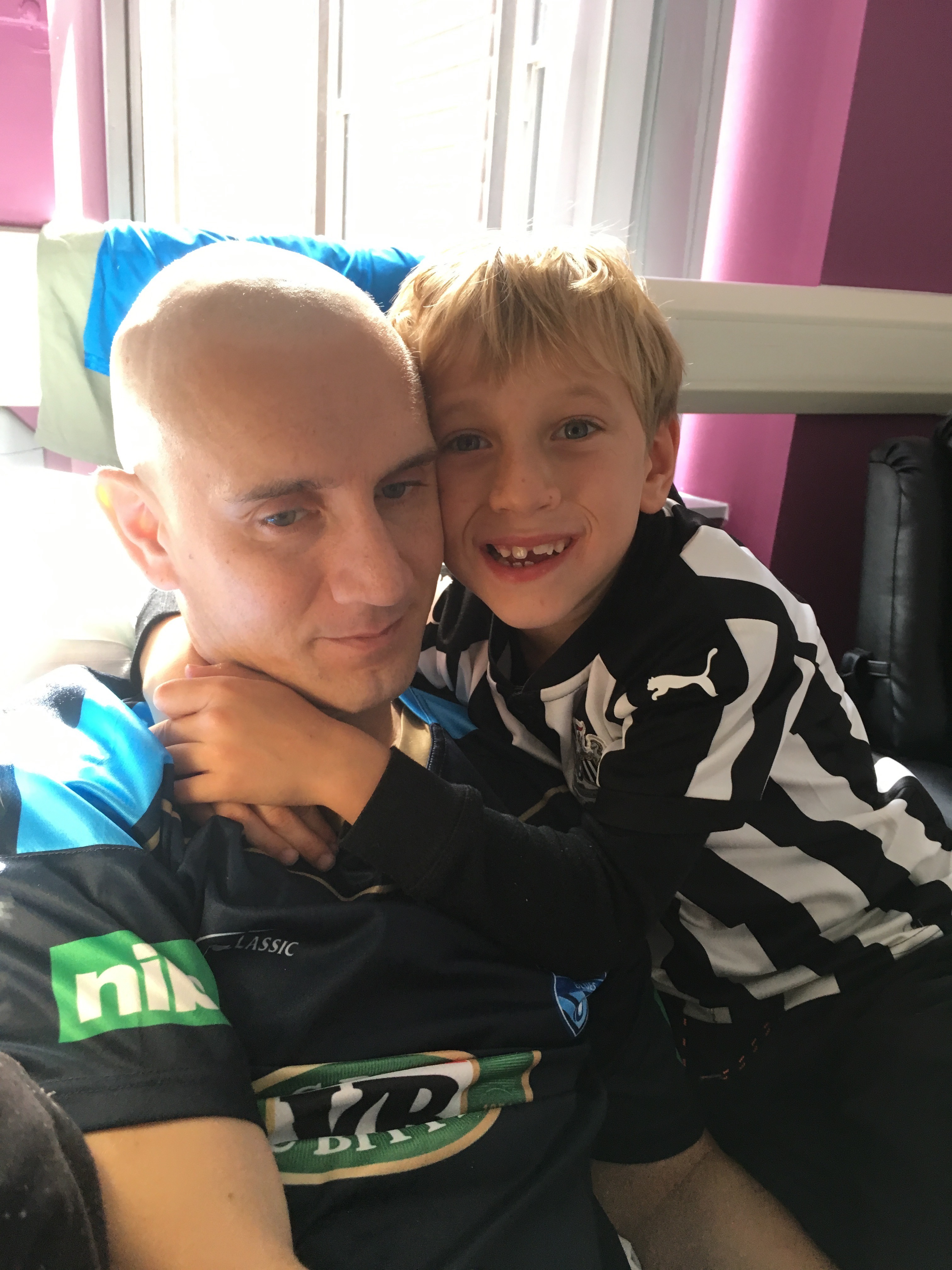 I coped reasonably well with the side effects but oddly enough, the loss of hair really bothered me. I never thought I was vain but here I was trying to find a hat mid summer, that kind of suited my not Jason Statham-esque head. (or torso to that end) With hindsight, I actually think the hair thing hit me because the bald look was the truly significant indicator of my illness. I became “part of that club,” that other poor folk got dragged into but not me. Surely not me.
Anyway, so we come full circle to the question posed at the outset.

As I asked, I heard Jenn take sharp intake of air in anticipation. She did not want to know.

7 years.
“But there is hope, if we can find you a stem cell donor”
We were told that as a Caucasian male I had a very good chance of finding a match in the 30 million globally registered donors. (The list is very poorly represented by ethnic minority groups across the board, something I am trying to change)

I knew then that I would be a problem child.
On the surface I look white British, but my genetic heritage nods very heavily to my Macanese (Portuguese-Chinese) ancestry.
And so, as I feared, it manifested, as a match was not forthcoming.
(Amusingly, I did get  phone call from the registry inferring I had a match. Problem was that they had matched my 19 year old self, who had registered as a student, with me at 40!!)
Then it became very clear what had to be done.
I had to find my own match and the only way to do that would be to get more people signed up. ASAP.
So the 10,000 Donors campaign was born. (10000donors.com)

As it says on the tin, I aim to get 10,000 new stem cell donors registered and am doing so:

And when 10,000 is achieved, I’ll add a zero to the target and continue. (In the UK alone, only 2% of the population are currently registered so there is huge scope to smash this, and subsequent targets!)
It is all about raising awareness and convincing people to talk about, share, like… just spread the word, about the power of this life preserving stem cell technology that can so simply, painlessly and freely be given by each and every one of us.
But more fundamental that the nuts and bolts of how we can grow the register, is what is truly offered.
It’s not about stem cells; they are just the vehicle that help us continue on our journey through life.

At its basest level, by signing up you are giving someone time with family, friends and loved ones. Time to see children grow into adults. Time to make memories with and for the people involved. Time to learn a new skill. Time to meet a soul mate and even time to make the plethora of good and bad decisions that make life so challenging and affirming.
For me, I look no further than Jenn, Max and Seb for my motivation to keep going and to proactively attack my illness. They did nothing to deserve this so I have no alternative other than to find my match. I have had the conversation with Jenn about meeting someone else were the worst to happen. Of course I would always want her to be happy but I’d be lying if I said it without bitterness and sadness. That alone hurts, but the thought of another man stepping into my role as father to my boys cuts deeper and more painfully than I can dwell on.
So I will do all I can to make sure that eventuality does not come to pass.
With your help, I will find my donor match and help thousands of other people at the same time.

_____________________________
I have often questioned my career decisions over the years despite doing pretty well on the whole.
It’s a real shame that through my illness, I have finally found what I deem to be a useful calling in the 10’000 Donorscampaign.
And of course I am trying to help myself.
But even if I don’t manage to find my donor match in time; if I can turn a negative into a positive and help others in need, then that is a legacy I will be proud of.

THANKYOU Peter, Thankyou for sharing your story.
If you are reading this and would like to help Pete’s amazing cause and be one of his 10k life savers in waiting, please please click here You might actually be Pete’s match. IMAGINE THAT!!
As ever, thankyou for reading
love

If you would like to be featured – I would love to share your story, please get in touch x

Not gunna lie. Much as I love a furniture shuffle,

After stalking @victoriaclarkinteriors for ages &

Much as it’s nice to go away, it’s lovely to b

Not gunna lie. Much as I love a furniture shuffle,

After stalking @victoriaclarkinteriors for ages &

Much as it’s nice to go away, it’s lovely to b