.
You are here: Home / Blog / Louise’s Story – Thicker Than Water

Loiuse’s Story – Thicker Than Water
When Louise contacted me, we started chatting on DM as she had noticed my jewellery design background – I explained I used to have a little business with my best friend, designing costume jewellery. She told me her family run a beads and findings company – and after a couple more DMs we realised that her family business was one of my favourite suppliers and I have been using them for years! Isn’t it a small world!!
Anyway – I am delighted to share Louise’s story about Hodgkins Lymphoma, in her own words.
HODGKINS LYMPHOMA
It took 11 months from finding the first lump to finally getting a diagnosis. I’d been sitting in bed reading a magazine when I put my hand to my neck and felt a lump, well two! I think I knew at that point that something was very wrong with me or maybe that was just my slightly postnatally depressed outlook, as the doctors put it down to that!
I’d had my second baby the previous summer, she didn’t sleep well, I’d been picking up every bug and infection under the sun but I was a young mum it was all to be expected apparently!
I spent the next 11 months bothering the GP’s weekly with random strange aliments, from fungal infections to food intolerances. Eventually via a private referral (requested around the time I thought I was really losing it), a consultant looked at me and said that’s either TB or Lymphoma!
My GP had told me it wasn’t a Lymphoma and I believed him. I didn’t want to know about Lymphoma nor did I know anything about Lymphoma. 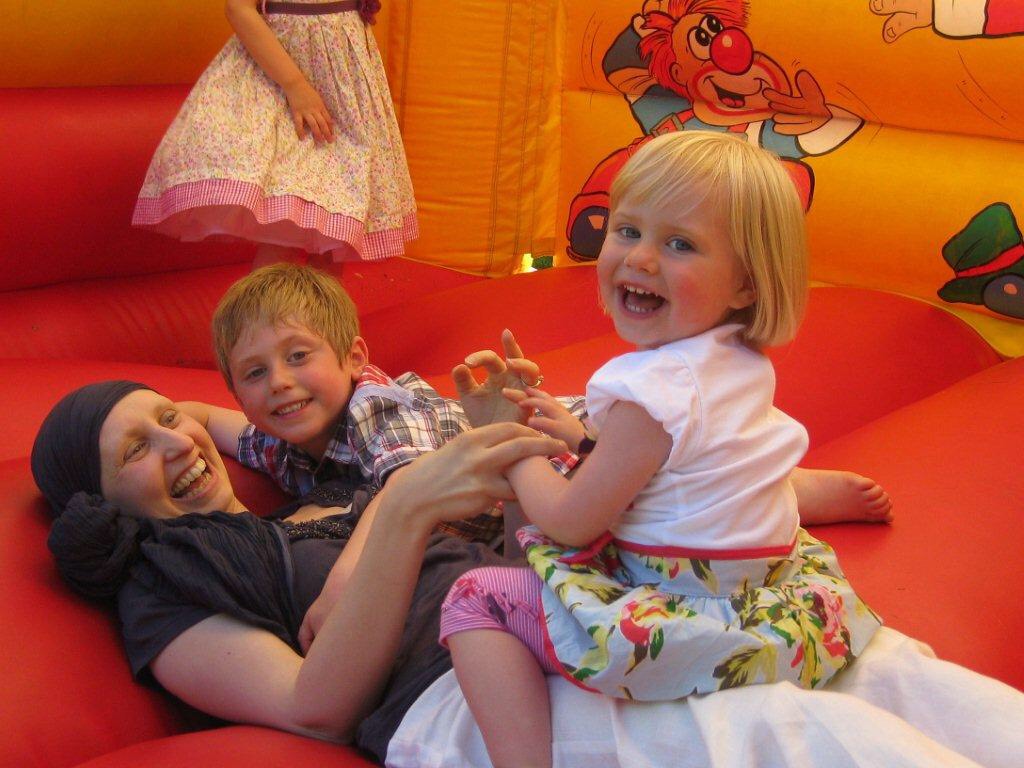 My diagnosis of Hodgkin Lymphoma came in February 2012, at that point I had a 5 year old and a 20 month old. I was told to expect 6 months of chemo and that although they would be the worst months of my life I’d get over it. Unfortunately this, it seems, was the optimistic prognosis. After the first chemo regime came the news that I wasn’t responding as I should have been, the chemo was changed and ramped up. Over the next year I tried 4 different chemo regimes, a monoclonal antibody therapy, Radiotherapy and eventually a donor transplant with my brother’s cells, which finally did the trick.

My treatment lasted 20 months and included 14 weeks in isolation at ‘Jimmys’ in Leeds. This was then followed by recovery from transplant, which took over a year. I emerged out of the other side somewhat battered and bruised. Shingles had struck whilst having Radiotherapy and resulted in a paralysed throat and face as I’d managed to get it along the nerve that runs to your ear (a condition called Ramsay Hunt). Adding up the statistics of getting Hodgkins and Ramsay Hunt I suspect I’m one of a kind!

I was very lucky to survive and became very aware that research was allowing me access to more options, including numerous clinical trials and I benefitted from the amazing Haematology team at ‘Jimmys’ who refused to stop trying options. I’m well aware that 10 years ago I most likely wouldn’t have survived.
We started fundraising for Leukaemia & Lymphoma research whilst I was between treatments and when the charity changed to Bloodwise I was invited to join the newly created ambassador scheme and I continue to fundraise for the charity, our latest event being a 1920’s ball last November. This year I’ve accepted a role on the policy panel, in the hope that some good can come of my experiences, especially regarding lack of GP’s knowledge of blood cancers and support for parents with Blood cancer.
………………………………………………………….
If you would like to read more, Louise has a blog
https://hanloumac.wordpress.com
And if you’d like to find her on Instagram you can find her here
. https://www.instagram.com/hanloumac78/
Both Louise and I would love it, if you haven’t already, to click HERE! to sign up to get on the Stem Cell Register. If Louise’s brother had not been her match, she would have needed the help of a stranger. Without a match, and not to put too fine-a point on it, her lovely children would not have their Mummy today.
Louise has been through so much and I am so grateful for her braveness to step up and share her story.
One thing I would like to say – blood cancer is not always picked up easily – as Louise ‘s story illustrates only too well.  It’s also not always picked up in blood tests ( I KNOW RIGHT)
Some blood cancers present themselves loud and clear, others are sneaky.
If you feel like you are constantly getting random bugs and viruses, like your immune system isn’t quite on point – you may have a lymphoma. You also may NOT  have a swollen lymph node  – or, like Louise you might have an obvious one in your neck, or say, groin.
If you are worried, please talk to your doctor.

As ever
Thankyou so much for reading
love