Hello! As lots of you know, we have been busy, beavering away on the Room Of  Gloom! This might end up being a long post, but I have been asked about every detail, so scan until you get to the bits you want to read!
This room is the original lounge from before the extension. Now we have the lounge off the kitchen, the R of G was a cold extra room that the kids used to play X box, and the cats used the carpet as a scratch post. Non of it was particularly inspiring.
Here is a BEFORE pic. (this was taken when we had switched sofas with our main lounge) 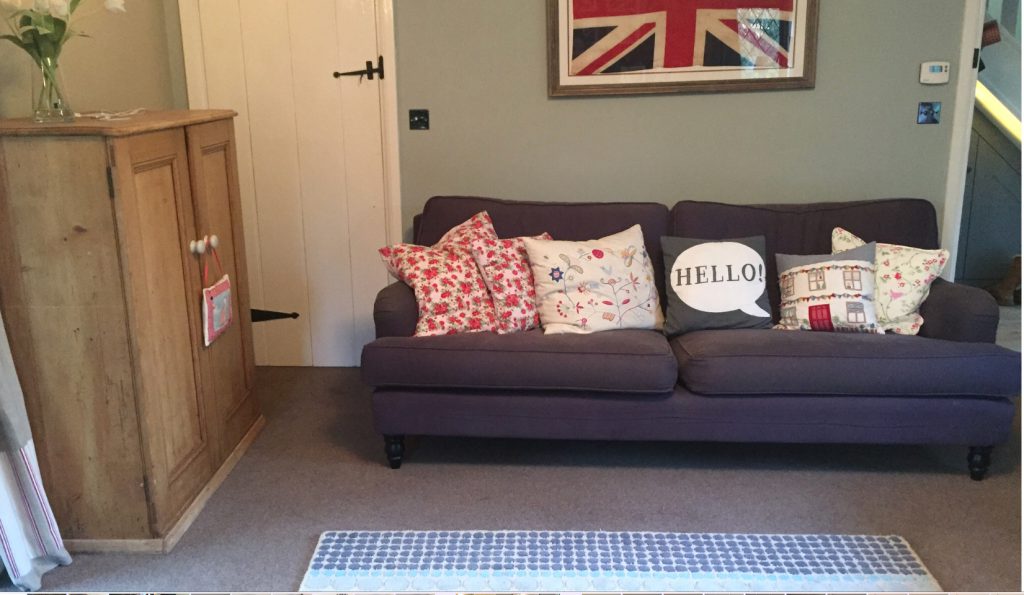 I had a bit of a bee in my bonnet about getting a yellow sofa. I mean, what other colour IS there, lol! So that was sort of what I based my ideas around…
After visiting one in John Lewis, I  fell in love with the LOAF, velvet sofas, but wasn’t quite brave enough!
So, we found the OSLOW sofa (we love its slightly retro shape and it is really comfy)  & had a lovely rifle through all the gorgeous colour swatches in store. Where HURRAH! we found the perfect yellow…sort of like a man’s flannel suit sort of fabric. PERF!
So the yellow sofa order, dictated the colour scheme…
I love shuffling furniture around, but in that room, there was only one place the sofa could go, and I really wanted to paint the wall behind it a lovely dark colour to make the sofa colour really stand out. (photo wall will happen one day – needs something don’t you think?)
We chose Farrow and Ball in Downpipe (a tried and tested dark paint, that is a dark blue/greeny/grey in the light in our house) I almost chose a paint from NEPTUNE, as they have some gorgeous colours. But in the end, plumped for what we had in the garage, lol, as we had some left from another project and I wanted to get cracking! Have a look at Neptune though, their pallet is lovely.
I have been on a Farrow and Ball paint course, and they recommend painting the woodwork in the same colour as the walls., to elongate the wall or something. Whaaaat?!! veering from the white eggshell path?! I know! I do love the fact that the wall isn’t broken up by large blocks of white, though. More dramatic! Not too worried about whether it the elongates wall height, but, whatevs! 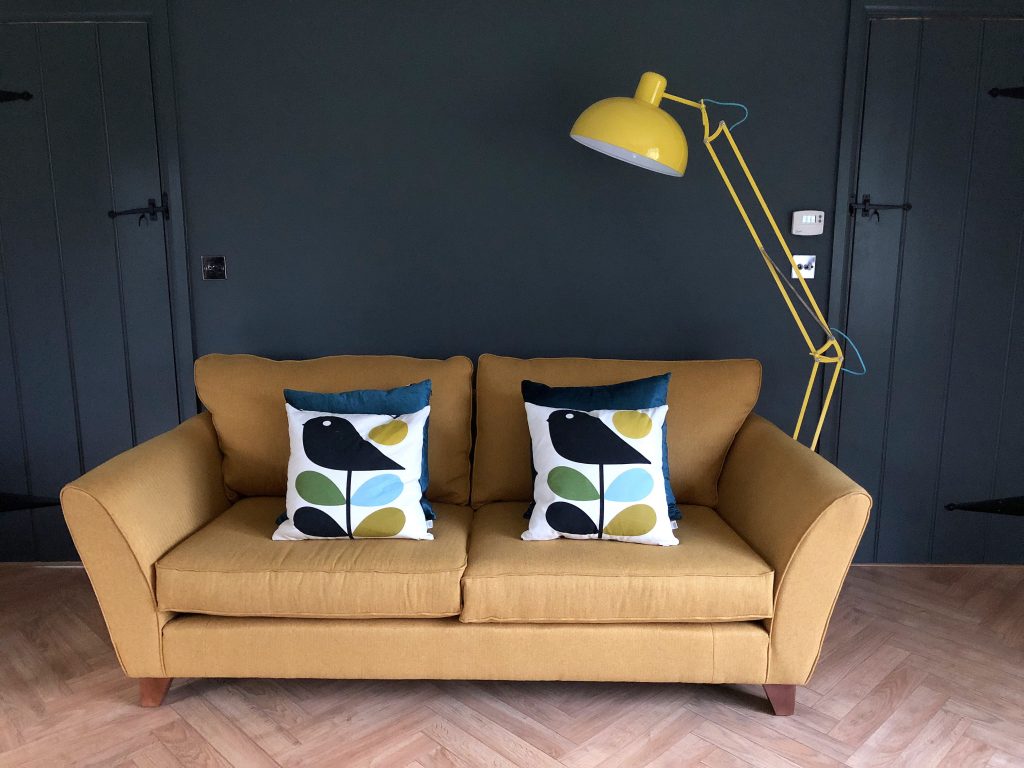 Now, I have a feeling that painting the opposite wall the same colour probably isn’t protocol, but I don’t care! We went dark on the walls either side of the fireplace and I love it against the brick.
Here is a link to my vase – it’s such a handy size 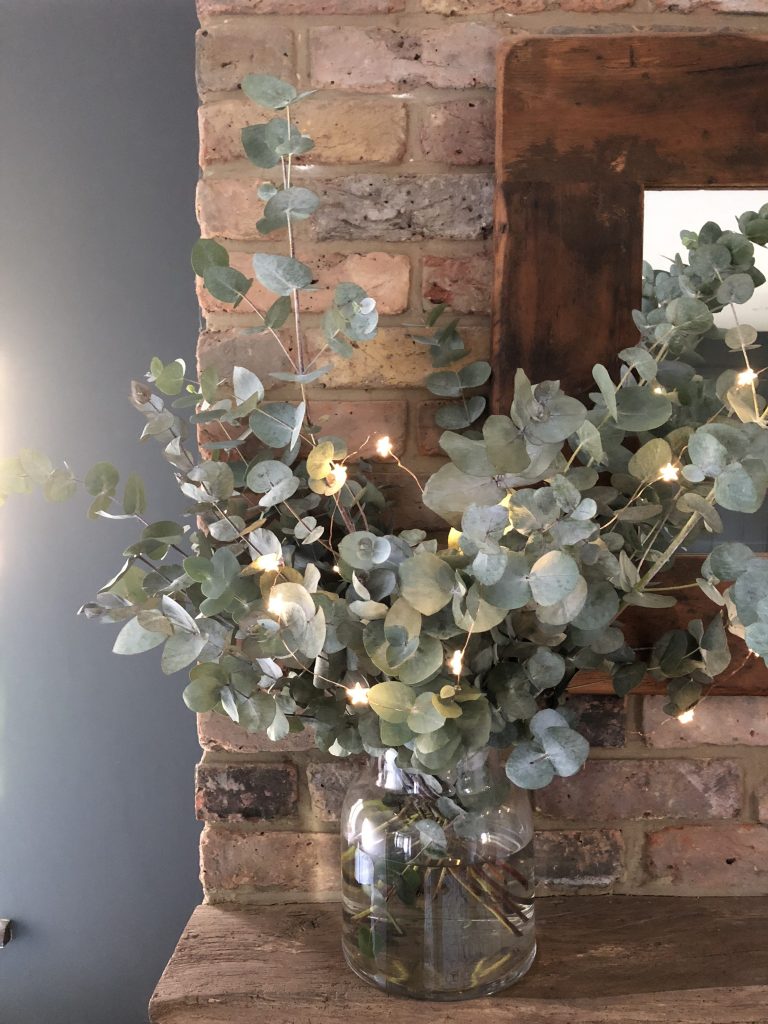 At this point we didn’t have any idea what the other 2 walls would be, so literally picked a white off the chart & despatched Gav to Homebase. We went for Farrow & Ball again, in Wevet, almost white TBH. Here it is next to Downpipe and against white eggshell skirting. (Also – I get asked a lot – the Singer table was bought in a sale for £18 – it was topless, so we added this pine top and I painted the lot in Annie Sloan CHALK PAINT ) 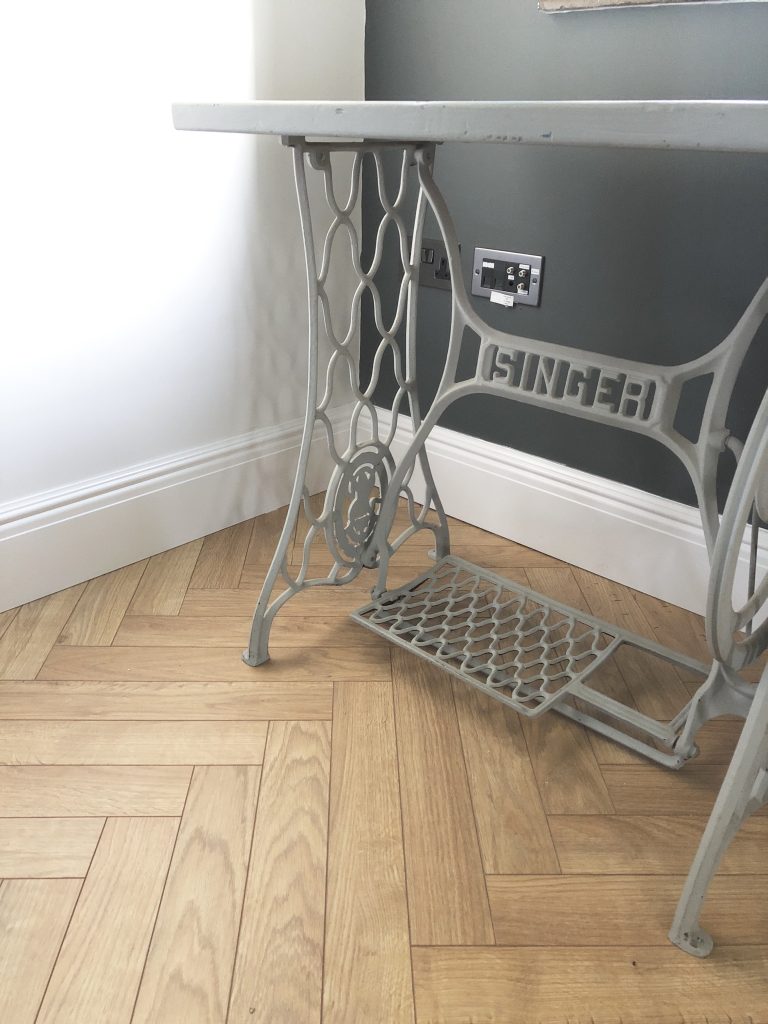 I know F & B gets a bit of stick, from decorators who all ‘hate it’ (do they though? Ours previously have rolled their eyes but were pleasantly surprised) and people who think it’s rubbish expensive paint. (I grant you, they are right, it is expensive) But personally, I love that the colours have a chalky-ness about them. I love that the choice isn’t too wide. (I can be lost for days in the self mix aisle) I also love that the colours sit so well next to each other and mainly I love it because even if it’s wrong, it’s right. The colours are all lovely (in my opinion, in the light in my house) The one time we had a F&B colour mixed was a disaster – I believe the VALSPAR is really good though, if you want to get a F&B colour mixed. (Not an ad for either company btw)
We replaced our skirting, more on why, later. And the other three walls all have white skirting. Incase you were wondering.

So that’s the walls & sofa sorted
Let’s talk about the floor now
We have underfloor heating which meant that a solid wood floor was not advised ( also we would have needed to sell a limb or two, to afford it!)
We have engineered wood in the hall, and it is fine, but we really struggled to find one we liked in a herringbone pattern.
SO, after trawling through Pinterest for ideas and trailing off to various floor shops, we eventually found a floor!
I am a complete laminate floor snob. No, I am not having laminate. She said…
guess what…
Our floor is 100% laminate and I LOVE it!!
Here is a link to the colour choices We chose ‘Venice Oak’ 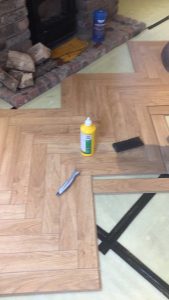 I think that the reason I don’t usually like laminate, is because there has to be an expansion gap between the wall or skirting and that is always covered with a strip of beading, which I always feel looks fussy and it’s more to clean!
So Gav came up with the brilliant plan of whipping off the old skirting boards and then, once the floor was laid, we fixed new skirting boards over the floor , covering the gap they leave between the plank edge and the wall, and voila! No need for the beading. HURRAH! (the eagle eyed will see we couldn’t avoid it round the bricks on the hearth though)
Gav chose a lovely deep skirting, it came pre primed and we gave it a quick coat of paint outside, before he fixed it to the wall. Then it only needed the top coat once in situ ( still managed to get paint on the floor though! )
So once the floor was down, obviously I ordered a rug that would cover most of it (lol) 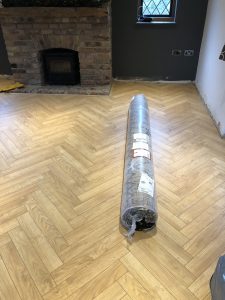 Some might say that the rug isn’t particularly adventurous, or anything new. (it has its own Instagram Page haha) But I figured, if it looked ok in all those houses on Instagram, it’d look ok in my house too. PLUS it was in the sale so a decision had to be made, quick sharp! You can find it here I absolutely love it!  It isn’t a high traffic room so we don’t find it slips, but I’d suggest a Rug Gripper if you think it might slip in your house. 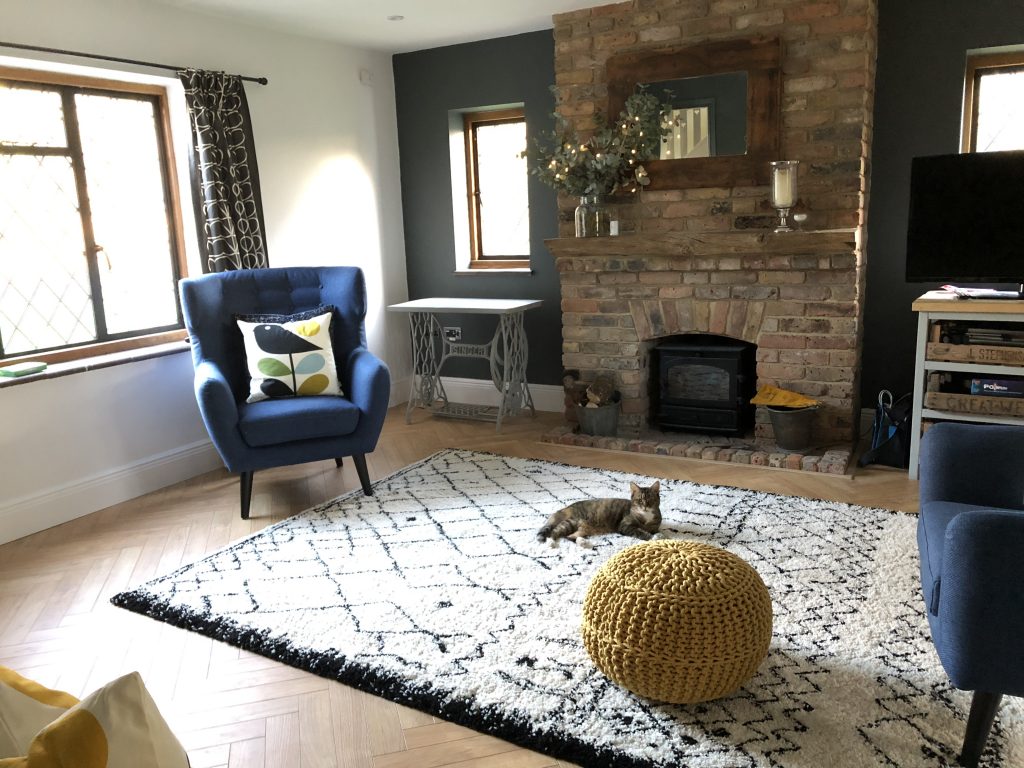 Curtains …
Gav picked them ! I was delighted! He chose Orla Kiely ! If you watched my IG stories you’ll know this already, but they were too long, so needed altering. Our poles are quite close to the wall, so the eyelet heading they came with, didn’t hang quite right.
So after ALOT of procrastinating and telling everyone about it on IG stories, I decided to alter them from the top, cut off the eyelets and sew on a pencil pleat heading tape ( what could possibly go wrong?!? 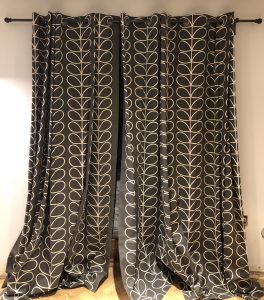 There are two pairs of floor length curtains, so I really didn’t want to mess them up ! To be fair though – They looked terrible ‘before’ so drastic action had to be taken!


Maybe I left them a teeny bit long ( they are on the highest ‘setting’ on the heading tape to make them as short as poss – or lowest, if you see what I mean)  But I am mainly relieved I didn’t totally ruin them! 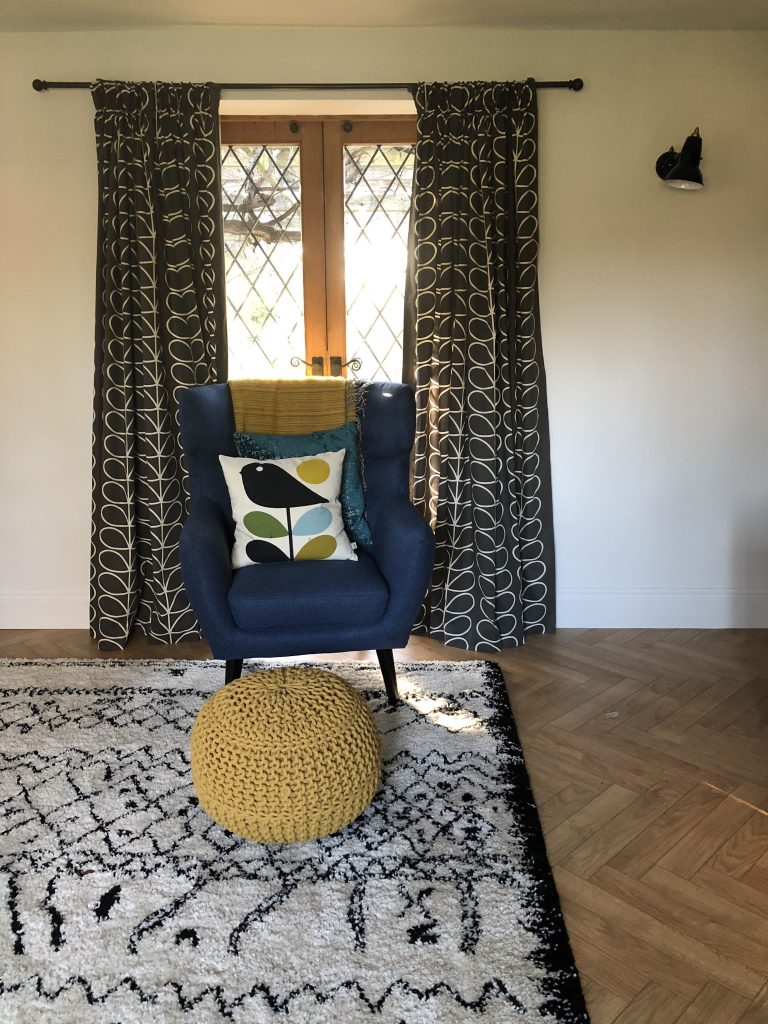 We were starting to get a bit of a retro theme going, which I quite like! We ordered two chairs from MADE  in SCUBA BLUE, but ohhhh man the pink with the fancy buttons was LOVELY!! They do the KUBRICK chair in lots of colour ways and I think its a really good price. 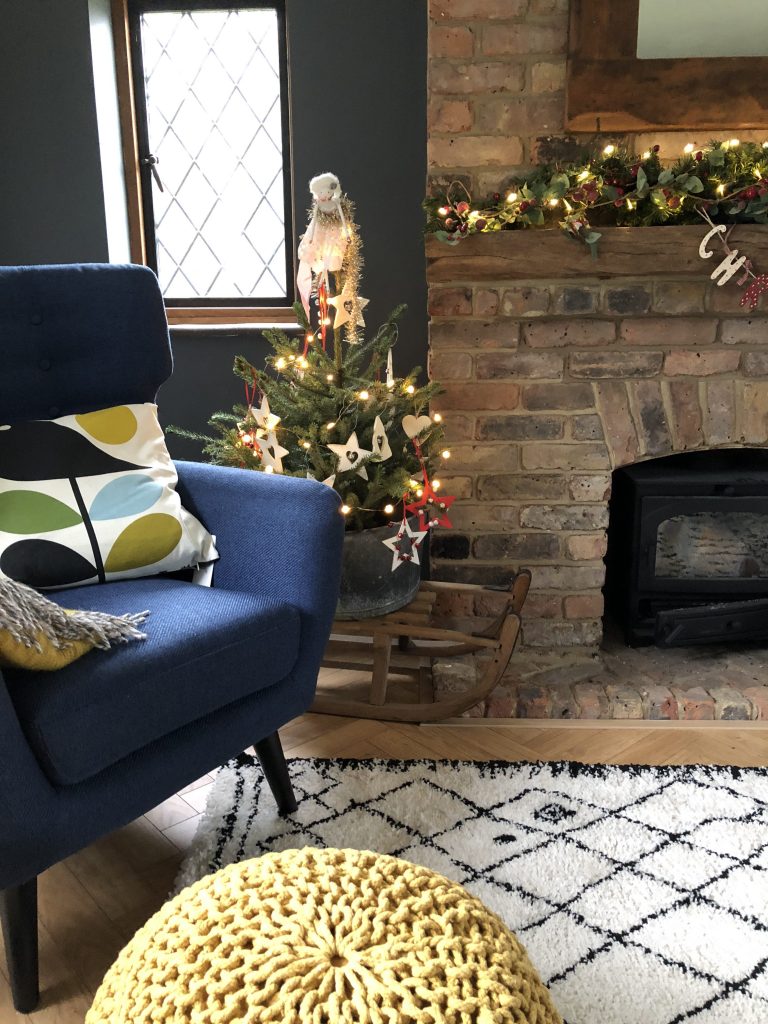 And Finally – Cushions, throws , wall lights and THAT POUFFE!
Who ever knew that I would NEED a yellow crocheted pouffe?? It was a bit of a curveball! I was cruising around BHS
Let me say that again ! BRITISH HOME STORES!!! They are online!!! And their homewares are GORGEOUS! They also do this gorgeous specimen in duck egg, but they are low stock so be quick!
They also have a gorgeous  range of cushions – which I was unaware of until they kindly sent me 4! They are the velvet and distressed velvet ones in my pics.
The Orla Kiely ones are from John Lewis 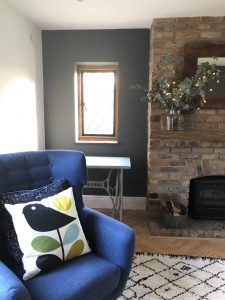 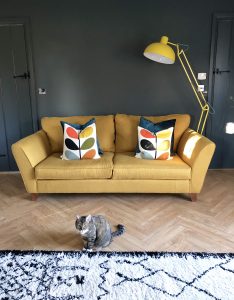 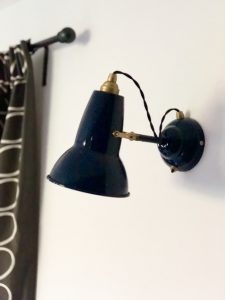 
And finally! My lovely yellow throw and the huge yellow light are from Cotswold Co
I hope I haven’t missed anything! Any questions please ask!
The room isn’t quite finished yet – I think we need a lovely picture wall behind the sofa, and I’d love a new mirror over the fireplace.
I’ll write another post about the window treatment I am making for the little windows either side of the fireplace
In the mean time – hope I have given you some Inspo for your next project – nothing like a nosy around someone else’s room to get you thinking!
Thanks for reading!
Love

This post is not sponsored sponsored by anyone. BHS sent me some cushions as a thank you for something I did for them, and they didn’t ask me to post about them. We payed for everything ourselves. I just wanted to share our room as I get asked all the time about where things are from. Some links are affiliate links. 🙂 xx